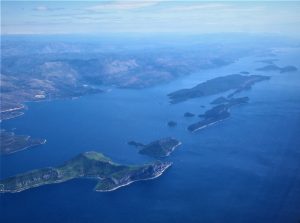 Elaphites are first group of islands toward SW when you set sail from Dubrovnik. Archipelago consists of 13 islands and islets, of which three are inhabited; Koločep, Lopud and Šipan. From sea side you can enjoy in relaxing panorama of rich Mediteranean and subtropical vegetation that covers islands and crystal clear emerald and blue sea. Other than natural beauties these islands have rich historical and cultural tradition since they were continuously inhabited since prehistoric age. The most famous period is that one related with Dubrovnik glorious days during middle and new age, when Elaphite economy and culture reached it s peak, which resulted in its rich sacral and secular heritage. There are numerous churches spread all over the islands, several monasteries and numerous  lavish summerhouses.

Koločep island is the nearest to Dubrovnik, with several ancient churches, local museum, interesting coast that is very steep toward open sea. Lovely walking trail is main communication from W to NE part of island. There are no motor vehicles.

Lopud is picturesque island in the middle of Elaphites with wide opened bay on the NW side. There are many ancient monuments such as pre-romanic churches, remains of rector palace, Dominican and Franciscian monastery. Here as well is lovely walking trail that connects opposite sides of island.

Island Šipan is the largest one among Elaphites. It used to be called „golden island” because of its large production of olive oil and numerous olive trees. Even now it is world number one by number of olive trees per km² and one of the reason for that is long lasting tradition that obliged young men to plant at least 10 olive trees before they get married as a proof that they are capable of supporting a family. There are 2 main settlements on Šipan island; Suđurađ situated in small bay on SE side and Šipanska Luka situated in larger and deeper bay on NW side of island, well protected from winds and it is safe anchorage. In Šipanska Luka are several high quality restaurants with daily fresh sea food caught by local fishermen in nearby area.